COVID 19 and the WTA TOUR 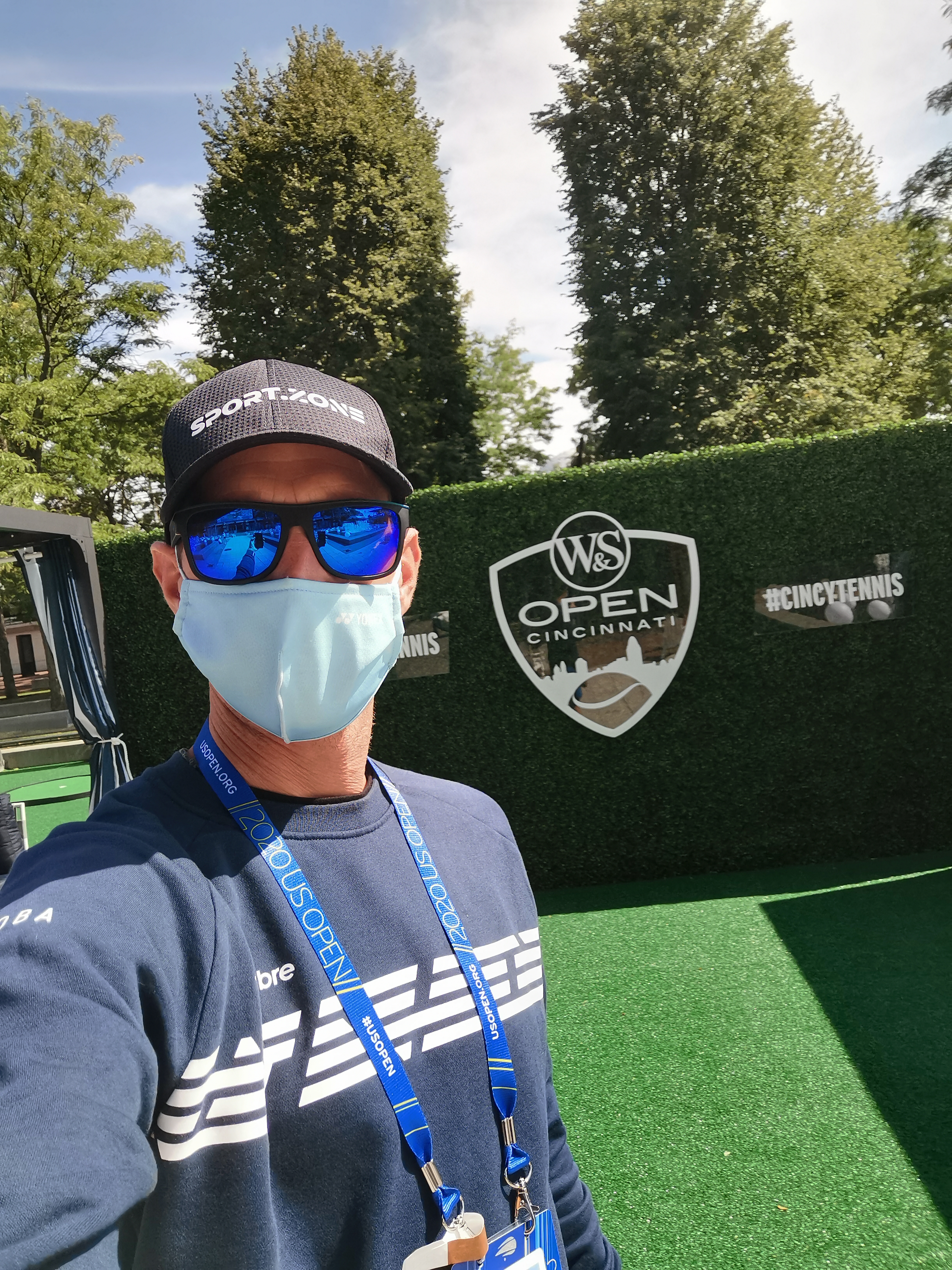 Let me first explain the rule concerning   they want to attend a WTA tournament. The players and their team travel to WTA tournaments from various countries. First of all you have to take into account the “relationship” between the two countries when looking at the epidemiological situation. Therefore, you need to ensure that you are compliant with all conditions before you can even travel. Sometimes all you need is a valid negative test for covid-19 in your home country,(not more than a few hours old, depending on regulations), an invitation from the organizer, visa etc… 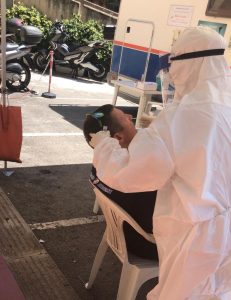 During your travel (especially at airports and planes) you are handed one or two forms to fill out, where you have to accept all the measures should you contract the coronavirus there.  whether you were in contact with a person who has tested positive for Covid-19 (like you could possibly know, especially at the airport where you meet numerous people), whether you have symptoms (a common cold is now apparently only a symptom for Covid-19. I advise against sneezing on the airplane: because all eyes suddenly turn to you, despite the fact everyone has masks on their faces), where you were in the previous days etc. All of these questions are, of course,   they want to find out everything about you, even if it’s all written down in the form. Are they checking whether you lied?

After you finally arrive at the official WTA hotel, they make you take the test. You take it, pick up your things, and head to quarantine in your room. Until you receive an e-mail with a negative test result, you are not allowed to leave the room   your meals through room service. The time it takes for you to receive the test results depends on the country you’re in; typically 15 to 48 hours.

After you receive the test results, the tournament protocol is normal. You get your admission credentials and   the club. Of course wearing a mask is obligatory everywhere. Exceptions are limited to tournament match play, making use of the gym, or while eating. There can only be two people per car, sitting in the back, separated by a plastic divide from the driver up front. Coaches wear masks even during matches; sitting outside on the stands with no one around us. Common sense obviously failed here. 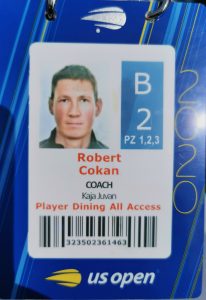 Then you have to repeat the test roughly every 48 hours to 5 days. This depends on the tournament and country, but you can practice and play matches normally during this time, and you don’t need to quarantine. You only have to quarantine yourself after arriving at the tournament to get into this “bubble”.

French players at the US OPEN were very misfortunate. Benoit Paire tested positive and everyone, who was in contact with him had to be quarantined in the hotel for 14 days. They weren’t allowed to leave their rooms to go to the hotel gym, despite having several negative Covid tests. Kristina Mladenović was even disqualified from the tournament; and was sequestered, along with her team, to their hotel rooms.  Let me point out that there were security guards in the hallways of the official US OPEN hotel; following our movements and making sure that others followed quarantine measures. One could say it was a sort of prison.

In the case where you travel from tournament to tournament, you are meant to take the test in the days that you’re in the WTA tour “bubble” (so between 48 hours and 5 days) and immediately after coming to a new tournament, but you don’t have to go into quarantine until you receive a   test result (this applies to the following tests; not the first, when you enter the WTA bubble)  and you can go straight to the practice court, if you wish.

To simplify  with an example: On Wednesday I took the test in Istanbul,   where I had to take the test immediately upon arrival but, while waiting for the results of this test, I could move freely on tournament grounds. This is how it has been in the WTA bubble until now.

This was the case until the evening before our arrival in Italy,   the Italian government decided on changes. There were four players and their teams on the flight from Istanbul to Rome. We all decided on a direct flight on Thursday afternoon qualifications for the tournament in Rome were starting on Saturday. By the time we arrived at the hotel at around 19.45, the testing facilities were already closed for the day (at other tournaments they performed tests even later) and they informed us that we can take the test at 10 am the next day and go to the club grounds without having to wait for results. It was all fine and dandy, except for the fact that no other testing facility opened this late compared to other WTA tournaments (in Istanbul they opened at 8 am). And Italy? The rooms that we reserved weren’t available, but we were already used to these  s of complications. We somehow managed to make the necessary arrangements, unpack, and fall asleep.

The next morning at breakfast we were in for a surprise. They told us we can’t go to the club until we get a negative test result from that day’s test. Instant shock! But how, since the first round of qualifications was the following day? Why not? Who gave these orders? They in  the blame on the Italian government, who had   an email the evening before with new rules and regulations; of which no one informed us. If the players had known this beforehand, they would have all taken earlier flights to Rome and would have arrived earlier, but the information we received in our email stated that the protocols remained unchanged.

So we had to take the test at 10 am and then wait in our room for the results. How are we going to be able to play the match the next day? Will the results arrive before the match? Awful. We asked the other players, who were here before us. They told us they waited over 24 hours to get the results. Naturally we 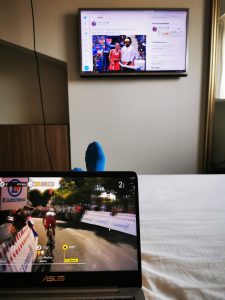 didn’t agree with these measures and so we tried to find a solution by talking to the event organizers. If you ask me, the WTA should have acted on Thursday evening to ensure that players arriving on that day receive their results quicker; since they know that players need to test out the courts and balls before t

heir first official match. To top it all off, the tournament in Rome is one of the biggest on the WTA and ATP calendar. But apparently this was not their priority. After talking and complaining for an hour that the players must have the option to test out the court at the club today, they somehow get approval to make

an exception for these four players and sent their tests  . At least they gave us that. But why could they do this now and not before? They assured us that players would be able to have a practice session in the evening. We were pleased with this information and we canceled the session for 2 pm and the car ride; and waited in our rooms for the results.

Kaja did in fact receive a phone call after 3 hours, saying that the test was negative and that she is allowed in the club. I was not so lucky and I remained in quarantine in my room until the next day.

I could only hope that Kaja’s match   be in the early hours, because then I  to help her. In this case I would have given the ones responsible a severe tongue-lashing.

I can only wonder about what will happen to the players that will, for various reasons, arrive here from Istanbul or somewhere else after us. How will they play in the tournament tomorrow, if they won’t get tested today? Impossible. WTA should not have allowed this to happen, especially at such a large tournament as this one in Rome.

This is all for now

P.S. Just to show you the appalling place for cardio training in the hotel. And this is supposed to be a gym in the hotel for the best players in the world?!

For the sake of comparison, the WTA tournament in Prague had a much lower prize money, but the organizer provided a large hotel for players and their teams only, which was closed  the public. They arranged five gyms so that 5 teams could train separately. But this hotel accepts other guests as well, who, of course, don’t need to get tested. And then they demand such strict measures and quarantines for us. And I’ve already mentioned the state of the gym here. I’m at a loss for words.