Tennis Cokan | Travelling to the US OPEN and the troubles with corona
16237
post-template-default,single,single-post,postid-16237,single-format-standard,ajax_fade,page_not_loaded,,qode-theme-ver-16.1,qode-theme-bridge,disabled_footer_top,disabled_footer_bottom,wpb-js-composer js-comp-ver-5.4.7,vc_responsive

Travelling to the US OPEN and the troubles with corona 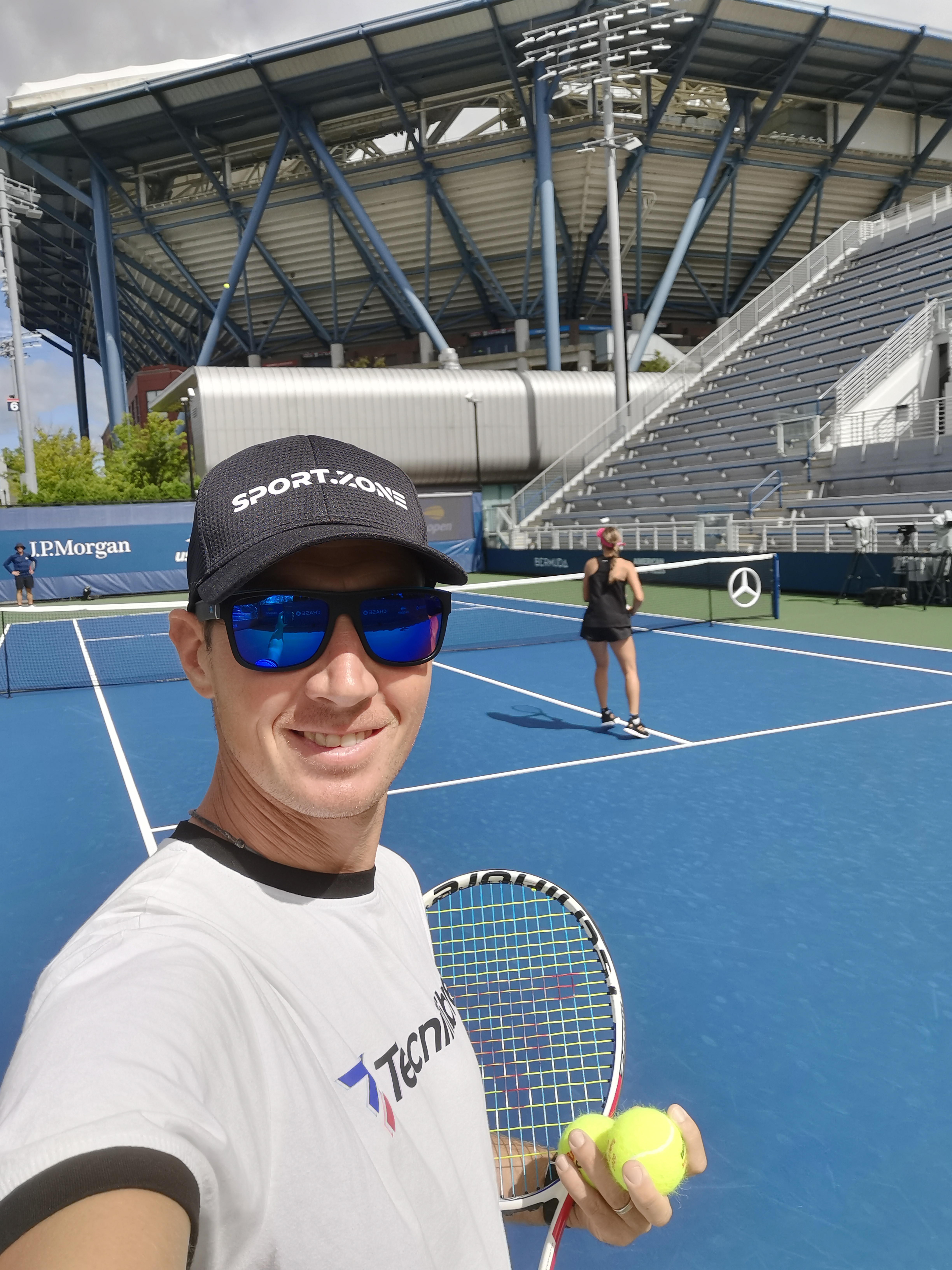 It will be another couple of years, before life as we know it will be the same as before the coronavirus, but since we all agree with this, I won’t waste time talking about it. This time I’ll be writing about travelling to the US OPEN and the tournament organizers’ safety measures, to keep us as safe from the virus as possible.

We left the Jože Pučnik airport early, a bit after 7AM. We had a layover in Frankfurt before crossing the ocean to New York. Everything went well, there was no significant turbulence, the plane was great and full to about 60 % capacity. I guess I don’t need to emphasize that wearing a mask the proper way is obligatory (that includes covering the nose) all the time while walking through the airport as well as on the airplane (the flight was 8 hours long), which is very uncomfortable. 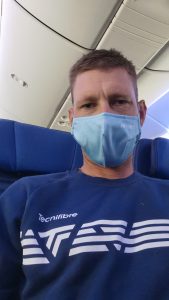 On board we had to fill out two forms, where the US government checks everything in connection to COVID-19. Where you were lately, whether you have symptoms, what you’re bringing with you, where you’re going, why and how long, the address of the place you’ll be staying at etc. After landing we had to go through three airport security checks. The first customs officer checked the forms, the next one took our temperature and the other one checked our passports and plane tickets. All in all, it was a pretty normal procedure so far. Some questions may cause a raised eyebrow, such as: Did you pack your bags yourself? How many pieces of luggage did you bring on the plane? Who are you travelling with? Do you have a return ticket? And a few other unusual questions.

Next there’s the normal passport check before you’re allowed to enter the country. Kaja is first in line. All of a sudden the customs officer calls a colleague of his and takes Kaja and another security guard to some room nearby. Now I’m next in line. »These two are together,« he says. The security guard comes to me, takes my passport and takes me with him as well. At first I didn’t find anything suspicious about it. I think to myself that they still have to check a few things before letting us in the country. When I walk into the room, which is about 50 m2, I see chairs and a hundred people crammed side by side. That’s when I realized that this matter won’t be simple and that there may be trouble. So much about preventing the spread of the virus, when they stuff us into a room without ventilation and without the possibility of keeping a safe distance. I sit down and wait. I soon find out that you aren’t allowed to use your cell phone in this room for making calls, taking pictures… They even blocked the signal in the room, so we were basically cut off from the rest of the world. All we could do was wait for them to call our names and arrange our papers. I didn’t have my documents and was waiting to hear my name. There were only two men working behind the counter and every 5 minutes they called out for someone to either let them into the country or to ask them additional strange questions. Do you remember how teachers in school were intentionally trying to trip you up by digging for things you didn’t know? This is what it looked like for every passenger. They demanded additional documents or proof of permission of entry. It was painfully slow. 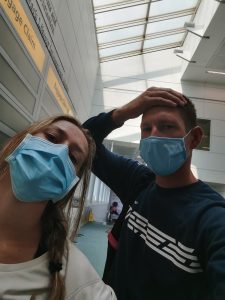 I wasn’t prepared for such a wait. I had very little water and no food. After travelling for 12 hours you aren’t exactly fresh, so this snag wasn’t exactly welcome. I kept asking myself, why this happened to us. We have an invitation from the US OPEN and all the required documents, but apparently it wasn’t enough for them. Time was passing extremely slowly. After an hour and 15 minutes they first call Kaja. After she tells them she’s travelling with me, I walk up to the customs officer, who’s unsuccessfully searching for my passport. He tells me it’s nowhere to be found and that I should take a seat. Another unpleasant wait that was interrupted after 15 minutes with him calling an unfamiliar name, while pointing his finger at me. I come up to him as he asks me if this is mine, while showing me a passport with a picture of an elderly woman in her 70’s. I was left speechless. When he realized his stupid mistake, he went on to look for the old lady, while leaving me to wait there. At that moment I’ve had enough of their games, so I ask his colleague what was going on and why we had to wait, since we had all the necessary documentation. He tells me the situation at the airport is chaotic because of the virus and that he can’t give me an exact answer as to why we were sent here, but that he apologizes for the hassle. He begins to search for my passport and finds it in a couple of minutes. He checks our documents once again and after an hour and a half lets us enter the country. Finally!

Apparently we were the last passengers picking up their luggage, because our suitcases were waiting for us on the floor in the middle of the room with the conveyor belts, bringing the luggage. We were also worried about where our driver was, since we couldn’t notify him of what had happened, because the signal was jammed and we were two hours late. Luckily he was waiting for us outside, visibly worried, and we all got into the large car. He was very friendly and told us we had about an hour’s drive to the hotel. Unfortunately the drive took an hour and a half, since we hit a New York City traffic jam. Upon arriving at the hotel, we realize we’re at the wrong place. He was supposed to take us to another hotel for testing and only then to the hotel where we had reservations. Another misunderstanding of the day, I thought to myself.

The test was relatively painless this time, because they have a new protocol. They explain how the test is done and then you perform the test yourself, while they only observe. This type of test is much more pleasant and easier to endure. After the test they put a blue tag on my arm, which meant I have to go into quarantine for 24 hours or until I receive a negative result. I return to the hotel starving, where, after travelling for 20 hours, they finally give me a room. At the front desk they warn me about the strict security measures at the hotel during my quarantine and the consequences, should I not follow the rules. A hotel employee escorts me to my room, which I cannot leave until I receive my test results. I have to order room service to get some food and call the front desk if I need anything. I order dinner, which they bring to my room very quickly. It looked like this: someone knocked on my door and left a bag on a cart in front of it. The employee stepped back a few steps, until I took my food and closed the door. It seemed a bit over the top, but that’s how it was. Tired, I watched a few live matches in Cincinnati and fell asleep.

The next morning I’m feeling a bit jetlagged and wake up as early as 5AM. After breakfast being delivered the same way as dinner, I was surprised to receive a text message a bit after 11AM that my COVID 19 test was negative. Now I can leave the hotel room and enter the world of the US OPEN. 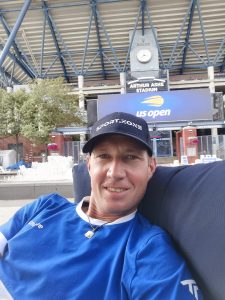 In order to guarantee that we stay in a “bubble”, there are no personal vehicles for transport, because that would mean too many drivers living in the hotel with us. Instead, they drive us around with buses. Only players and staff at the US OPEN are staying at the hotel. They are following very strict measures. No one can sit next to you on the bus, only two people are allowed in the elevator at the same time (a security guard stands in front of the elevator to make sure), we have to fill out health-screening forms every day and show them, before boarding the bus. They remind you about safety every step of the way.

The US OPEN complex was not much different. Security guards check for proper usage of masks and give us warnings, if we take it off even for a moment. Food is ordered via QR codes on the table and the staff then bring it to you, so there is practically no physical contact. You reserve courts through your phone and there are limitations as to how many people can be in the gym at any one time, while the staff diligently disinfect every weight and machine after being used. You can’t even get used tennis balls for practice, because they don’t want us touching other balls, so you have to collect them yourself, if you want to have them for practice sessions. Massages are not allowed on scene, only in the hotel, with the exception for emergencies before or during a match. 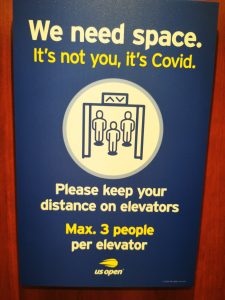 But the biggest difference is seeing the entire complex of the US OPEN without any spectators. Something that was completely unimaginable only a year ago. We can walk around freely and they offer many fun games throughout the park; mini-golf, billiards, basketball, lounge chairs, massage tables etc. What awaits us is a completely different US OPEN than any other in history. Even the tournament that is just finishing up (Cincinnati) is a very unusual sight without line judges and spectators. I watched a bit of the Djokovic V. Struff match. After a wonderful point it was almost dead silent on the court. I’m sure players will miss the energy, bursting from the stands, and that feeling that comes over you, when you play a particularly good or particularly poor point. This time the emotions will be boiling only within the players themselves, but only the tournament will show, how much a player will be able to get into their groove. Only one thing is certain; we are in for something that no one will be able to fully prepare for. 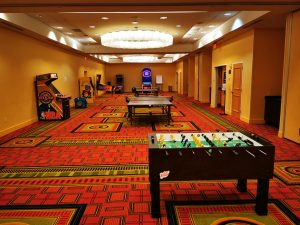 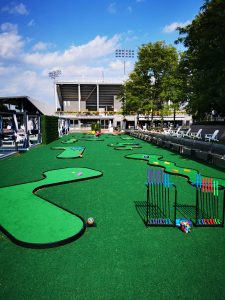