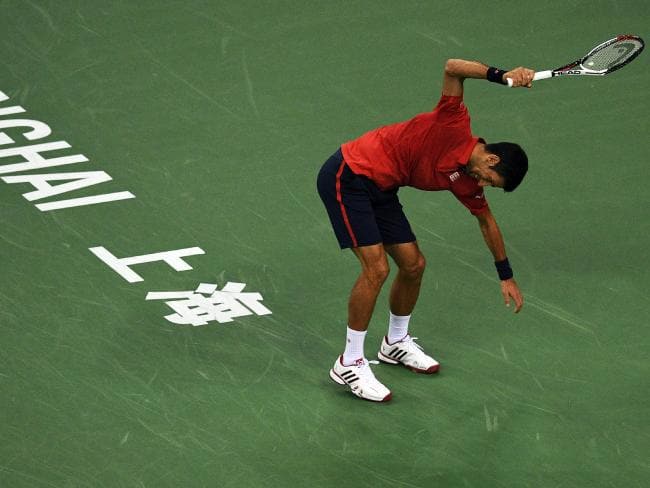 I was hitting the forehand so well yesterday, but I can’t get it going today.

Apparently, I forgot how to serve.

I couldn’t do anything today.

I don’t know what happened to me, I didn’t feel the ball…

I can’t hit anything; I keep on missing!

There are probably millions or similar types of sentences to be heard amongst the tennis enthusiasts around the world. Have you had similar thoughts yourselves? Did these phrases help you play better in your next match or did they provide a solution for your failure? Did you play better because of them? What do these types of sentences tell us? For me these are signs that a player feels helpless and is looking for excuses for failure elsewhere, than where they actually hide.

Nothing’s going your way today? Who is responsible for it going or not going? And what does the phrase ‘nothing’s going my way’ actually mean? A person goes somewhere to get there and that doesn’t have much to do with tennis.

If nothing’s going your way today, what are you doing differently than yesterday or the day before? Is your energy level weaker? Are you more tired? Is the opponent different? Is their style of play different? Are they playing at a higher level than last time? Is the surface different? Or maybe the circumstances (wind, rain…)? Or is your mental attitude towards the match different, before even stepping onto the court? If you expect the same level of play and the same result as last time, but aren’t willing to invest the same amount of energy or more, then your level of tennis is automatically lower and questions or doubts begin to surface. Why aren’t I playing as well today? If I beat this person easily last time, then I should do the same today. Unfortunately, with tennis, every match is unique.

You’ve probably already seen this happen at the professional level, where a player beats their opponent fairly easily, then a week later loses significantly against the same opponent on the same or similar surface. Where lies the reason? Did they forget all their knowledge of tennis and things weren’t going their way today? There can be many reasons, but there is no need to look for them in the middle of the match. The bottom line is, it’s up to you what you’ll do and how you’ll play. How much energy will you put in, when things don’t go according to plan as they did the day before or at a previous meeting? How will you react in that moment, when you make a mistake or your opponent plays a good shot? The sooner you realize that every match is unique, every day is different from the previous one and that your level of tennis, in most part, depends on you, then you will no longer be saying sentences, such as: “Nothing was going my way today.”

I can’t hit anything and I miss everything are two sentences that I don’t like to hear as well. We all know what »anything« and »everything« mean, right? Sentences like this tell me that the player is very negative towards his tennis image at that moment. If the meaning of the words »everything« and »nothing« were literally true, the player would lose almost all points in the match. There would be no ball exchanges with the opponent. The fact is, the players don’t mean this sentence literally. Unfortunately, people are prone to negativity and it’s the bad things that stick with us for a longer time than the good ones. That’s why we sometimes feel that nothing is going our way in the match. The ratio between positive and negative reactions is strongly on the side of the negative ones in recreational tennis and among younger competitors. The players are often too ashamed to show positive emotions on court, while they use negative reactions to justify their mistakes and helplessness in the given moment.

In my opinion, the solution lies in better analyzing a given moment on court and adapting to the situation. First, we have to admit to ourselves that, for example: I’m not reaching the ball quick enough, my energy and determination aren’t high enough, the opponent is using a different tactic today, I’m hitting the ball late, my body isn’t firm enough etc. Secondly, to look for a solution in the sense: How do I change the flow of the game with a tactical change? I have to hit the ball more in front. I have to position myself better, I have to account for the wind, I should take less risks, put more energy into each shot in movement etc.

Calming yourself down, playing just point by point and being in the »here and now« is the greatest art form within the game of tennis, because the previous match counts for nothing today. You have to make peace with the situation and find a reason for your: »Nothing’s going my way today.« When you start looking at a tennis match and everyday situations on court in that way, you will certainly become a better player.

Nothing is more precious than being in the present moment. Fully alive, fully aware. Nhat Hanh