Only together can we succeed

27 Aug Only together can we succeed

I want to be a professional tennis player. I want to rank among the ATP or WTA top 100. These thoughts are common with many tennis players, parents and coaches. Only with dedication and hard work of every single team members is it possible to achieve such a goal. But I would like to touch upon a somewhat larger picture and draw parallels between the Slovene mentality and things I notice in tennis here. I don’t need to explain that the pool of tennis players in Slovenia is much smaller if compared to the rest of the world and our neighboring countries. The only country in our vicinity with players that are constantly among the world’s elite, but with conditions similar to ours, is Croatia. I bet you ask yourselves from time to time, why they have so many top ranking players while we don’t. In my opinion there are several reasons. One of them is definitely the mentality, which is a little »wilder« than ours. More parents go all in, children quit school and dedicate 100 % of their time to tennis at a very early age (this includes financial investments and staking all of their possessions) and some manage to break through to the top. Another reason is a rich history of globally successful players, who now use their knowledge and personal example to push younger generations forward. The third reason was their national tennis center in Zagreb (I’m using the past tense, because the center was unfortunately closed this winter, because it was in bad shape), where the best players had unlimited practice time during winter and mutually pushed each other forward.

And now we’ve reached my main point for today. They had many great tennis players in one place. This kind of situation is a dime a dozen. 90 % of players in the top 100 came from these types of settings, where there were many equal opponents, who had to fight and prove themselves daily. Why are academies so popular around the world? Specifically for that reason. There’s a plethora of various players that you need for practice at certain times. Competition for a place in the team or with a specific coach amongst them is fierce. They have to prove themselves every day and practice hard to not fall behind in comparison to their friend or rival.

But what about here? We’ve had good generations in the past and I will be naming some of them. Just remember the Srebotnik, Pisnik, Matevžič, Križan and Rampre generation, which launched three girls among the top 50 on the WTA rankings. And the Žemlja, Kavčič, Bedene, Rola generation that launched four boys among the ATP top 100? Incredible stories from tiny Slovenia. Have you ever asked yourselves how they made it? They were each other’s competition, they pushed each other forward and many of them trained together. In most cases we’re talking about boys (in the era of Žemlja and Kavčič there were quite a number of competitive players that helped them come this far), because it’s much more difficult having several excellent girl players at the same place in order to help each other. “I or my kid will succeed, but I don’t want my neighbor to.” The Slovene mentality. »Let’s only practice individually with our own personal coach every day. We won’t be playing practice matches with a competitor, because I don’t want my child to lose and then think that he or she isn’t good enough or that their confidence will drop. We’re going to a tournament abroad alone, somewhere far away with our coach, because that’s the only way they’ll take good enough care of my kid, so that we’ll get the necessary international points and be the highest ranking Slovene player on the international scene« and so on. The list of similar ways of thinking is very long and it points only in the direction of failure.

Dear parents and coaches, believe me when I say that without collaboration during practice sessions, friendly matches and tournaments, your chances to succeed in tennis are very slim. Some years ago I created a Facebook group »tennis competitions abroad, mutual help«, but the response was very poor. Almost nobody wrote in the group for the purpose of helping each other. I have often travelled abroad, visited academies and several clubs across the world and believe me when I say that every single day equal players engage in fierce battles amongst themselves. Each and every day they want to defeat the best competitor and each day they deal with the same problems they face later in tournaments. It becomes easier for them there, because they are used to these types of duels and have an easier time dealing with pressure.

The only solution that I see is for clubs and good generations of players to start coming together at one place, as they did in the past in Kranj, ŽTK and Ptuj. Something similar will finally happen next year in Ljubljana, where three powerful clubs will join forces. It is important to bring together the best players in one place with a unified vision under a good coach to take care of everything. There is still talk about a national center, but I don’t think it will do much good, if we each insist on going our own separate way. And this is why I’m making an ap 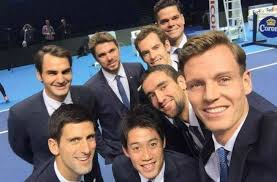 peal to all tennis aficionados in Slovenia: Let’s put our typical Slovene envy aside and stop begrudging the success of others, let’s train and start going to tournaments together, let’s share the enormous costs of tennis and launch perhaps another champion among the top 100.

Enjoy the most beautiful sport in the world.